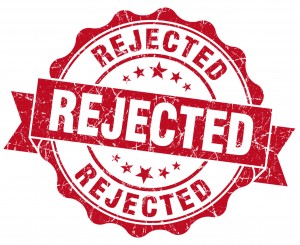 “If first you don’t succeed, try, try again” so says Thomas H. Palmer in his “Teacher’s Manual” published in the 1800’s. This sentiment still holds true today. Yes, it takes more than a few attempts at something to move the needle forward. Your job search is no exception. Anytime you put yourself out there you are subject to the dreaded notion of rejection. Even if you are looking for a new job, up for a promotion or trying to secure a new client, rejection is part of the plan and there really is no way around it. The sooner you get over it the faster you will move past it.

For every 10 times you go after something figure it will take at least 8 times for you to hear, “No”. So the lesson here is you embrace rejection as part of your road towards success. In a recent article, published by Adam Grant on LinkedIn, where he asked several innovative entrepreneurs what they feared most the response was, “Ultimately, what we regret was not failure, but the failure to act.” It takes many attempts before you realize you are either going down a rabbit hole or are relentless in your pursuit of your goals. In some cases it maybe both.

How do you react when you are rejected? Do you shut down and hide? Are you embarrassed? How hard to you feel you have been punched in the stomach? Feeling any and all of these emotions is a normal part of the process. What you do next makes or breaks your chances at success. Many people don’t even try to move past the feelings of rejection, hurt or fear. When sometimes all you need to do is “get over it!”.

Finding the courage to push past your fear of rejection might be all it takes to move from one opportunity to another. You might know you hate what you are doing now but you have no idea what to do next? Just by asking the question you are taking the first step in your ability to get over the fear that no one wants you or that you will never work again.

Rejection will take many shapes and forms in your job life. You may put a proposal out for a new client only to be told that there is no money in the budget to move forward. You have been on the 10th interview and find out that they have decided to go with another candidate and you have no idea why? Or, you could be up for a big promotion and the company is sold or you have a new boss and the promotion has been put on an “indefinite” hold. Life happens and things change and so long as you realize that there is ALWAYS something better waiting in the wings than your optimism will carry you into the action you need to take in order to move ahead.

Having the ability to stare rejection in the face and shrug your shoulders and say, “What’s next?” is the best way to fight the fear and move onto the next job offer with your name on it.

Looking for a job?  Find us at www.greenlightjobs.com